Here’s movies 30-21 on my annual list of films for this year. Again, my ranking system is completely arbitrary, so feel free to bitch about them and share your equally valid opinion in the comment section below. If you’re a spoilerbaby, SPOILER ALERT throughout. Feel free to sit in a hole and not interact with culture. The first set of films is available here. 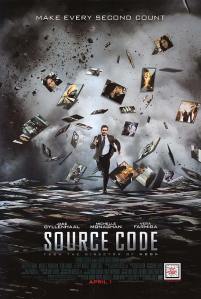 Forgive me the obvious, but yeah this movie was basically Quantum Leap. But luckily, I love Quantum Leap, so it was alright. I also really enjoyed Moon, the previous film by this director, which was actually way better than this one, so you should check it out. I like Jake Gyllenhaal, I really like Michelle Monaghan (mostly for Kiss Kiss, Bang Bang) so this was pretty good. Like any mystery sci-fi movie that isn’t Primer, though, the structure of the mystery in this movie’s a little easy to figure out, plus the movie goes on for ten minutes longer than it has any right to. Those ten minutes of stupid right at the end definitely knocked this one down about 10 pegs, easily. Also the poster is pretty terrible. 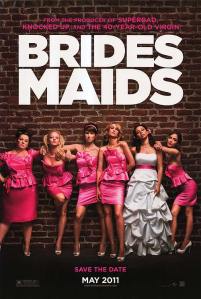 Funny, but fairly forgettable. I didn’t dislike it, but it’s not in the same class as 40 Year Old Virgin, Role Models or Pineapple Express. 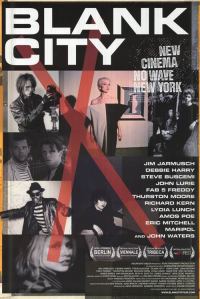 This was a cool little documentary about the no-wave film movement that arose in New York in the wake of punk and New Wave. My friend JP said to me something afterwards which rang really true: the doc was pretty good, but you’d never want to watch any of the films they showed the making of. I understand that sentiment quite a bit; one of my treasured collections is a set of DVDs holding nothing on them but awesome trailers for what were undoubtedly shitty grindhouse films. It’s tough sometimes to make people understand that no, I’m not into rape-revenge flicks, or extremely violent slasher movies, I just like watching the trailers for them as I admire the sheer balls-out approach they took to trying to put asses into seats back in the day. Anyway, Blank City is undoubtedly the best introduction into this brief moment in cinematic history. 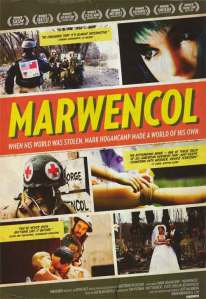 This was a fascinatingly strange film. Just as you think it’s as weird as it’s going to be, some other peel of the onion is taken off the main guy, and suddenly we’re forced to see him in yet another new light. Also, in my opinion, his photography is absolutely beautiful. For those of you who haven’t seen this, it’s about a man who receives massive brain trauma and copes by creating a small WWII-era European village in his backyard, which he populates with American and German soldiers. His analogue in the town of Marwencol has various adventures which replicate things that happen to him in his daily life, or which he uses as revenge upon the men who hurt him. Simply fascinating.

This was another good film that I don’t remember too much about. I liked seeing Pegg and Frost onscreen again (they make an appearance in another film much higher up on the list, so keep your eyes peeled), Seth Rogen’s stoner alien was pretty funny, Sigourney Weaver was appropriately menacing, etc. I did think Kirsten Wiig’s character was a little annoying though, and you could really tell that Pegg and Frost were not accompanied by director Edgar Wright in this one, so the film suffered some in comparison to their previous outings. Still, pretty fun over all. 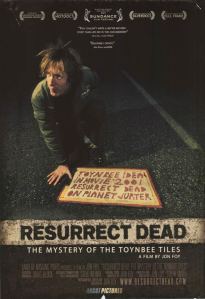 25. Resurrect Dead: The Mystery of the Toynbee Files (Metro Cinema)

This was another fascinating documentary (the more astute among you may be noticing a theme here…) about strange men doing strange things. This movie focuses on the urban legend of the “Toynbee Tiles”, strange street art that can be seen all over the Eastern seaboard of the United States in addition to South America. The pictures in question refer to a prophecy that all dead human beings will be reborn on the surface of Jupiter, as Stanley Kubrick foretold in the film 2001: A Space Odyssey. It really reminded me of what a real-life version of my favorite role-playing game Unknown Armies would be like, a world in which obsessive-compulsives battle one another in a war underneath all of our noses. It could have used some trimming though, as there was a lot of re-enactment of what the investigators felt as they uncovered new clues, which I feel could have easily been excised. Although, it’s not like the movie was that long, really. 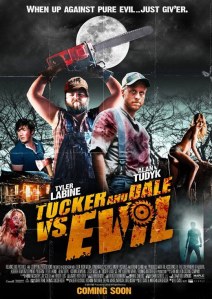 This locally made (in so much as Calgary is in the same province as me…) film was a fun re-imagining of the classic slasher genre. I’m a fan of both of the male leads, who were on the TV shows Breaker High and Firefly, and I like seeing college kids get killed by their own stupidity. So much so, in fact, that I ran a role playing game based on the same subject a little while ago. So yeah, I enjoyed this film quite a bit. I liked how “hillbilly” eventually became the dirtiest word imaginable, and the part when the guy accidentally jumped in the woodchipper made me laugh pretty hard. You might need to know a little bit about the genre before watching this one, though, as a lot of the jokes are predicated on your knowledge of slasher film etiquette. 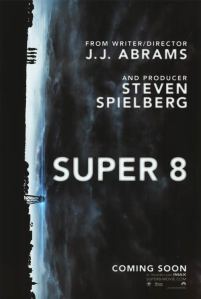 Of the two “kids on bicycles find and defeat aliens” films this year, this was definitely my second favorite, but that’s not to say it’s a bad movie. I just feel like this is a nostalgia-seeking smart missile that couldn’t directly hit me as a target as I’d never really grown up during this era. I will say that I thought the movie the kids actually ended up making was pretty hilarious, and I also enjoyed the ’80s-esque attitude towards kids and violence, swearing, etc, which is almost gone nowadays. This movie actually really made me recall Let Me In from last year, which also used the same time period, but to a massively different effect. I feel like that one was potentially a bit more successful than Super 8, at least from a directorial standpoint. The scene in which the vampire’s keeper sneaks into the kids’ car and patiently tries to kill them before all hell breaks loose was like a mini masterpiece. And can I say, getting back to Super 8, the alien hanging people upside down like that would have killed them really quick. you don’t live too long in that position. Definitely not a week, or however long it was. 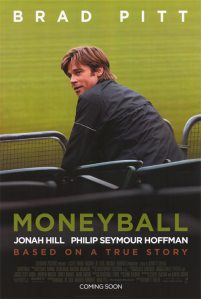 This was an excellent argument for not knowing much about a film going in. Since this movie is about baseball, and I’ve only ever successfully finished watching a whole baseball game once in my life, I knew next to nothing about the Oakland A’s franchise going in, other than the fact that their use of an apostrophe is incredibly incorrect and irritating. So I had no preconceived notions about what was going to happen going in, which was a huge benefit. I really liked how this movie took you into the behind the scenes of running a ball team, as that’s not something I’ve seen too much in movies. I liked how the players were treated in a sort of hands-free manner, as they’re professionals and don’t need the sort of mollycoddling you might expect; they understand for the most part that they are just meat to be used in pursuit of championships which are in turn only in aid of eventually selling merch. It was kind of nice to see a broken-down guy get a chance back into the big leagues though. I also like that it was basically a movie about math, that’s kind of the reason I went to see this film, come to think of it. I was intrigued by the fact that it wa about a cool equation you could use to win baseball games. Kind of reminds me of the equations used to derive collateralized debt obligations (as seen in Margin Call) to some extent. 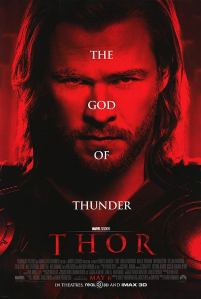 What’s this? A legitimate comic book movie around the half-way mark of my list? There’s a variety of reasons that Thor was not the greatest film, and this doesn’t just have to do with my intense hatred for the character in the comics. First off, it was shot shall we say “obnoxiously” in 3D. Characters would stand stacked along the screen sometimes to attempt to drum up visual interest, or occasionally there’d be dutch angles for no real reason than so that the 3D would be “justified”. Don’t do that, 3D is not a neccessary evil, so don’t make the home, non 3D viewing experience awkward in retrospect. Also, the movie ends completely backwards. By the end of the film, Thor is safe back home in Asgard, with pretty much all the loose ends sewn up. This is not exactly the most interesting way to end a film, by returning everything to the status quo. Plus it makes getting him back for this year’s Avengers megaflick somewhat needlessly difficult, as someone needs to fix the Bifrost Bridge and get his ass back on Midgard before he can do anything. One last thing, the way that the destruction of Laufey’s realm, Jotunheim, is held up as this big plot point is pointless and dumb. Who gives a fuck about Jotunheim. None of the humans even know that it’s real. Threaten to blow up Earth maybe? Don’t try to make me care about the ice planet full of assholes.

More movies on the list in a little while. Feel free to explain why Jotunheim’s continued existence as one of the Nine Realms is worth me caring in the comments section below.