“My choice, however, was prompted by considerations essence was, as I realized too late, a piteous compromise. All of which goes to show how dreadfully stupid poor Humbert always was in matters of sex.” (p. 25)

The Resolution Project Season Two: For my New Year’s resolution last year (2011), I decided to try and read all one hundred of the novels picked by Time Magazine as the best since their inception in 1923 to the list’s publication in 2005. I got almost halfway through. I’ve decided to bull-headedly push on through and try and finish the challenge, continuing with the same caveat as before: I’ve exempted myself from reading books I’ve already read, leaving eighty-six or so left to go. Some spoilers may lie ahead, so be warned if you’re the type to be bothered by that. It’s not really worth getting that angry about though. 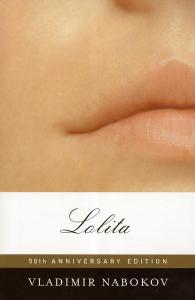 The Elevator Pitch: “Humbert Humbert” is a recent emigré to New England following a failed marriage in Europe. Humbert’s obsession is with the species he calls “nymphets”, girls aged between nine and fourteen who have yet to be ravaged at all by age. Dolores Haze, the eventual target of his fatal attraction, is a girl obsessed with movie magazines, comic books and ice cream bars. What follows next is probably one of the loveliest depictions of something we the readers know deep down is absolutely abhorrent.

What I knew about this book, its subject and its author going in: Lolita‘s probably one of the most famous books on the entire Time 100 list. It’s been made into two movies, the good one of which was done by auteur director supreme Stanley Kubrick. I’m going to watch it some time this week, hopefully.

As for the author, Vladimir Nabokov, I waxed philosophical about how much I liked his other entry on the list, Pale Fire, here. Suffice it to say, I was pretty excited for this one, given its impressive pedigree.

Thoughts: This has been a bit of a tough one for me to review, as I really did enjoy it, but I don’t have a lot to say about it. It’s like The Great Gatsby or The Grapes of Wrath, just a classic awesome novel that has been accordingly analysed to death over the years. It’s really good, and if the subject matter doesn’t creep you out too much to touch it, you should definitely read it.

One of the things I guess I should have guessed about Lolita from having read Pale Fire first was that it was at times going to be pretty hilarious. Once you are able to distance yourself somewhat from the, yes, disgusting goings-on between Humbert and his captive nymphet over the course of their “romance”, you have to think about the what the reality of a relationship between a middle-aged man and a precocious young girl would be like. Obviously they have nothing in common: Humbert would have us believe that in addition to his matinee idol looks, he’s also incredibly intelligent, where Lolita’s not much more than a typical movie magazine-reading little girl.

He essentially (and legally) becomes Lolita’s parent over the course of the story, and while that gives him a bit of a delightful frisson for breaking the incest tattoo, it also forces him to come to terms with the reality of his situation. Some of my favorite bits of the story are when even Humbert takes a break from lusting after Lolita to call her a brat or something, like you would a normal child. While Nabokov occasionally alludes to Lolita’s childish love of movie magazines, current music, etc., it’s an interesting experiment to think about what the story would look like nowadays. There would definitely be a lot of Justin Bieber listened to on the road, I’ll tell you that much.

Nabokov, in his afterword, speaks of wanting to write a quintessentially American novel, one that takes the landscape of the country as seriously and allusively as European writers do their own climes. So in addition to being amazingly transgressive, even to a modern-day reader as myself, the book is also a great road novel, in addition to a sort of female bildungsroman. I was also sort of shocked to find that the book is also an excellent critique of the schooling of young women; when Humbert takes Lolita to a private school, he’s appalled by the curriculum, which teaches “useful” skills like:

“[t]he four D’s: Dramatics, Dance, Debating and Dating. We are confronted by certain facts. Your delightful Dolly will presently enter an age group where dates, dating, date dress, date book, date etiquette, mean as much to her as, say, business, business connections, business success, mean to you, or as much as [smiling] the happiness of my girls means to me. Dorothy Humbird is already involved in a whole system of social life which consists, whether we like it or not, of hot-dog stands, corner drugstores, malts and cokes, movies, square-dancing, blanket parties on beaches, and even hair-fixing parties!” (p. 177)

It is at once a little quaint and nice to see hot-dog stands and square dancing brought up as a system of culture for teens as it is condescending to see that a young girl’s education should not extend beyond these things. And really, is this school much different from the applied math courses and life-skills management classes kids who do not plan on going to college take in school these days? At least when she was stuck with Humbert Lolita became somewhat worldly, not that it makes up for essentially being a hostage in sex slavery though.

It’s also interesting to think of the book as a collision between Worlds Old and New. Humbert’s tastes extend towards chess, French literature and gin, while Lolita loves movies, soda pop and jukeboxes. I’ve heard the book described as both “Europe lusting after American youth and joie de vivre” and “America subverting and changing European tastes in pursuit of cultural hegemony”. I’d probably have to agree with the former statement more, but you could look at the way Humbert himself changes during the course of the novel as a gradual lifting of the European out of him to be replaced with a hollow American shell. You know, if you felt like it.

I found the cover picture up there at an awesome website called “Covering Lolita“, which is a repository of all the known covers the book has had over the years, in as many countries as they can find. While looking through the covers and enjoying the typography on display, I was struck as to how difficult it must have been, and continue to be, to market such a strange and beautiful book as Lolita. 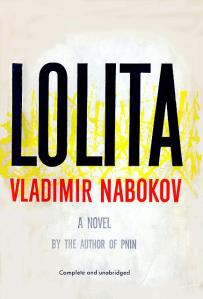 I like this one the most; the one I grabbed for this post up top is just what my copy looks like. There’s a lot of plain, text-based covers, impressionist paintings, and when we get to the first movie era, tie-in stills featuring the iconic heart-shaped glasses. 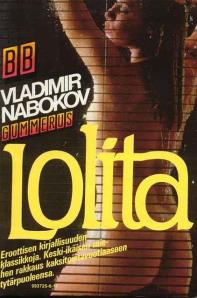 Weirdly, some of the covers try to sex up the book, this Finnish one (from 1998!) being particularly egregious. I think that the variety of approaches used to demonstrate the book’s importance speaks to just how interesting and unique Lolita is, and how the issues it raises still resonate, maybe even more nowadays.

Honestly, the fact that a TV show like Toddlers and Tiaras exists in a post-Lolita world is awe-inspiringly strange to me. On the one hand, young girls are to be protected and kept safe, this is obvious to people who are not evil. But sometimes, marketers and fashion types still toe the line with regards to how young girls’ youth and beauty can be used for more nefarious purposes.

“But every once in a while I have to remind the reader of my appearance much as a professional novelist, who has given a character of his some mannerism or a dog, has to go on producing that dog or that mannerism every time the character crops up in the course of the book.” (p. 104)

Similar books on the Time 100 list: Humbert’s narration, which is prone to hyperbole and bouts with madness, begrudgingly reminded me of An American Tragedy, which I won’t recommend that hard though because I hated it so much. If for some reason you’re into books where children are raised very very poorly, you might also like reading Housekeeping. Finally, I’ll recommend Pale Fire again, because it’s really good, and deserves to be as well-known as Lolita.

Next up on the Resolution Project: A Dance to the Music of Time Book Four: At Lady Molly’s (1957), by Anthony Powell.