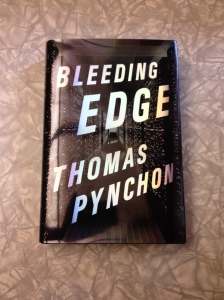 As some of my friends from university who I subjected to drunken attempts at getting them to read The Crying of Lot 49 might attest, trying to condense a Thomas Pynchon story into a short synopsis is a bit like trying to explain math to a cat. Here goes: Maxine Tarnow is a fraud investigator from New York’s Upper West Side circa early 2001, who’s officially lost her license but doesn’t really seem to mind all that much. Her main focus these days is doing under the table jobs tracking down tech companies with shall we say “creative” approaches to their financial stewardship, as the glorious nights of the first dot-com boom are beginning to resemble the morning after.

She ends up skirting the orbit of a secretive nerd billionaire named Gabriel Ice, who’s seemingly at the centre of a web of corruption, replete with CIA fixers, Islamic extremists, Russian spec-ops stoners and sci-fi weaponry. Ice’s mother-in-law is a ’60s radical turned proto-blogger named March Kelleher who’s perhaps Maxine’s best-suited ally in the search, providing her with an outlet for all the dirt she digs up. Maxine also becomes involved with her ex-husband Horst again, and spends her downtime shuttling her two sons around to social engagements and private school. As the case deepens and the paranoia begins to crest, Maxine starts to realize that something bigger might be at stake than a paltry few million dollars. And she’s potentially proven right on September 11th, 2001.

I feel like Bleeding Edge‘s heroine might be a kind of culmination of Pynchon’s depictions of 20th Century women, as to me Maxine recalls some character from every book barring Against the Day, which I still haven’t finished yet and Mason and Dixon which was mostly about guys and also not in the 20th Century. There’s a return to the world of Upper East/West Jewish women that are found in the early parts of V., the figure of a free-love seeker of truth like Oedipa Maas in The Crying of Lot 49, the dialectic between radical and narc that recalls the kinky relationship between Frenesi and Vond in Vineland and the strained relationship between detectives and their loved ones found in Inherent Vice.

Maxine is not the most layered character, existing mostly as a sounding-board for various nerds to spout insane theories to, but in the world Pynchon portrays, her relative normality might makes her the weirdest one of all. That’s not to say she’s square, though. She’s definitely the heir to Oedipa Maas’ style of investigation, and is not above sleeping around, doing drugs, even pole-dancing at one point to get closer to the truth.

Bleeding Edge is a hang-out novel, where the pleasure comes from having entertaining people crack jokes with each other and compete over who’s more paranoid. There’s also some of the silliest/brilliant jokes you’ll find in a literary novel this year; some of my favourites include references to legendarily late video games of the era, increasingly ridiculous bio-films Horst watches on Maxine’s couch, and various new Pokemon characters. There’s one reference to a famous Washington newspaper that’s so silly I laughed incredibly loudly at my girlfriend’s Thanksgiving dinner this year (yes, I was reading there, what of it.)

One of the entertaining detours to be found in Maxine’s quest comes in the form of DeepArcher, a “deep Web” program that to me read as a mix of Second Life, Minecraft and Snow Crash‘s Metaverse. DeepArcher becomes a place where Maxine and others can mourn the freedom of the early Web, and eventually maybe even mourn the lives lost on 9/11. There’s some beautiful descriptions of impossible cities here, New Yorks that never were but maybe should have been. Being me, I kind of wanted some more description of how such an expansive system would have worked in 2001, but the language used down there is so poetic that I got over it.

I would definitely recommend Bleeding Edge to established Pynchon fans, but I’ll still stick with either Vineland or Inherent Vice as being the best gateway drug. This is not the sort of book where the mystery is wrapped up in a bow and all the loose ends are wrapped up; it’s more like the real world, composed entirely of loose ends and the strange, dogged sorts who keep pulling away at them.