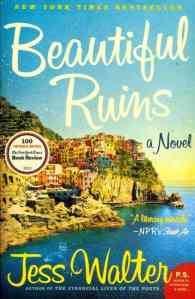 The gods returned to Rome one last time in the summer of 1962, as filming began on the 20th Century Fox film Cleopatra. The production is now mostly known for being legendarily troubled and over-budget, the primary reason being the tempestuous romance between megastars Richard Burton and Elizabeth Taylor. Their frequent lovers’ quarrels, combined with Taylor’s myriad health issues and Burton’s gargantuan drinking habit, made Cleopatra run way over schedule and even threatened to destroy the studio itself. The tumultuous courtship between these two filmic demigods had reverberations all around the world, with some even calling the media frenzy that surrounded the couple (and overshadowed the rest of the film) the birth of modern obsessive celebrity culture.

Jess Walter’s wonderful novel Beautiful Ruins uses the pre- and post-Cleopatra landscape to tell a poignant and layered story about love, loss and the relentless passage of time. The story begins when an ailing ingenue named Dee Moray makes her way from the set of the film to the tiny fishing village of Porto Vergogna just down the coast, where a chance encounter between her and a local hotel owner named Pasquale Tursi sparks a series of love affairs, artistic endeavours and deaths that continues to echo all the way to the present day. The hotel is pretty much deserted, with the only other guest being an alcoholic American WWII vet named Alvis Bender, who comes to the “Hotel Adequate View” each year to try and finish his memoir. Meanwhile in the modern day, the now aged Pasquale journeys to Hollywood seeking a legendary producer named Michael Deane, who he’d originally met in 1962 when Deane was parachuted into Italy to save Cleopatra at any cost.

The story of Beautiful Ruins is presented to readers through a variety of viewpoints and writing styles. In addition to the nostalgia and wonder conjured up by the 1962 story, we also find a chapter from a Joseph Heller-esque World War II chronicle, a picaresque look at performing at the modern-day Edinburgh Fringe Festival, a pitch for a movie about the Donner Party, a chapter from a Robert Evans-style movie mogul’s memoirs, and much more. The author proves himself to be a master at switching between these disparate styles, with each section having callbacks and in-jokes to other parts of the story creating an enclosed universe. The fonts and formatting even change within the book itself, to reflect things like a typewritten manuscript, or scenes from a play, which is a nice touch. The overall effect reminded me a little of David Mitchell’s Cloud Atlas, which also jumps around in timeframe and narrative makeup, and similarly presents a world in which seemingly innocuous decisions in the moment can have life-changing consequences over the years. The final sequence of Beautiful Ruins is a lovely, bravura setpiece that rivals the end of the last episode of Six Feet Under, or perhaps the long paragraph where the parrot flies around town checking in on all the characters in Michael Chabon’s Telegraph Avenue.

Walter is very canny with his treatment of how the world of the movies can mould and otherwise affect peoples’ lives. For mega stars like the hilariously, constantly inebriated quixotic adventurer Burton and the only heard about in whispers Taylor, the power afforded to them by the movie world allows them to bestride like colossi, leaving mere mortals twirling in their wakes as they go about fulfilling their slightest whims. For the more bit players like Dee and Pasquale, movies are instead a mirror by which the equally important trials and tribulations of their own existence are reflected, just bigger than life and twice as colourful. While the insights about the moral and creative bankruptcy that have always afflicted Hollywood are by no means original, they serve to further reinforce the fact that life is circular, themes come and go but the grand important things like love and art are always present.

I would highly recommend Beautiful Ruins to someone who is interested in the periods of post-war Italy and 1960s/nowadays Hollywood, or to readers who enjoy a degree of fun intertextuality in their stories.