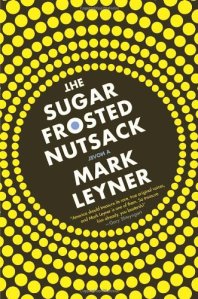 “Even those who consider all this total bullshit have to concede that it’s upscale, artisanal bullshit of the highest order.”

About a year ago, I thought that it might be difficult to summarize the plot of Thomas Pynchon’s latest novel, Bleeding Edge. This line of thinking feels very quaint to me now, as I’ve entered what I’m going to call the “Post-Nutsack” era (P.N.) of dealing with strange storylines due to Mark Leyner’s masterful book The Sugar Frosted Nutsack. It is potentially one of the most complicated and ridiculous things I’ve ever read, but for the most part, I loved it.

I’ll say up front that this will probably be one of the most divisive novels I’ve ever reviewed for this blog. People on Goodreads either seem to love this book or they absolutely despise it, depending on whether or not they can fall into its groove, which vacillates wildly between religious monotony, schoolyard-level humour, in-depth examinations of sexual fetishes, and parodies of academic bullshit writing. I can’t really blame people who fall into the latter camp, even though I’m coming out here as strongly pro-Nutsack. I can completely understand someone giving up on this book, as it seems deliberately intended to annoy you a lot of the time. Luckily, for me anyway, the fun parts outweighed the annoying ones.

Perhaps the best way I’ve come up with to describe The Sugar Frosted Nutsack is as if Hesiod’s Theogony was being read out to you by someone who has just taken ecstasy and stayed up all night watching cartoons, or if The Rape of the Lock was made into a Pixar movie and set in the world of the Jersey Shore. I’d whole-heartedly recommend everyone reading the prologue of the book at least, some of which has been hosted online by Vice Magazine. Here, Leyner lays out his new pantheon of gods, who have names that recall lucha libre stars or characters in turn of the century comic strips: El Brazo, the God of Virility, God of Pornography, God of Urology; Fast-Cooking Ali, the God of Platitudes and the inventor of “woman’s ass”; Mogul Magoo, whose portfolio originally encompassed only bubbles, but eventually came to include any time something envelops something else; La Felina, Goddess of the Downtrodden, the Despised Ones and the Sans-culottes. There are many others, too many to list here, but a lot of the fun of the book comes from the hilariously low-key adventures of these deities.

These gods, who live at the top of whatever tower is currently largest in the world (at the time of the book’s printing, this was the Burj Khalifa in Dubai), are obsessed with one Ike Karton, a recently-unemployed butcher living in New Jersey. Ike is beloved of the gods, and later on it is suggested that he’s the only man on Earth who even knows of their existence, so I guess this makes sense. The main narrative (if you want to call it that) of The Sugar Frosted Nutsack is presented as an epic saga that revolves around one morning: After waking up, Ike decides he doesn’t want to eat anything really “breakfasty” for breakfast, electing instead to go to a restaurant for a tongue sandwich. Ike has a conversation with a waitress, writes a narcocorrido for his band The Kartons to perform, hangs out with his daughter’s drug-dealing boyfriend Vance, and then he gets assassinated by Mossad sharpshooters while standing on his stoop. Pretty straightforward, right?

While the actual actions that happen in the human world are relatively simple, your enjoyment of TSFN will come from whether or not you enjoy the litany of things that occur meta-narratively around the story. When I said “epic” above, I really meant it: in the world of TSFN, the story of Ike’s last day on Earth is primarily delivered to audiences by blind, drug-addled bards, who imbibe nothing but Sunkist Orange Soda and bang on the empty jugs with heavy tchotchkes to maintain a rhythm during recitations. The book shifts genres and writing styles constantly, with an arch, cerebral tone throughout that talks about reactions to the epic, the history of its recitations, academic treatises about the epic, an interview with a couple who has just seen the epic, a radio call-in show, an online message board, etc. I actually really lucked out, I think, by listening to this book as an audiobook, as hearing the story read by its author is at least meta-narratively the way it was intended to be. The recording also does some fun stuff with sound, like a few sequences that are read backwards.

“This is Ike the chimera, the hybrid beast with the severed head of a bard and the sugar-frosted nutsack of a hero.”

Like in the above line, which comes in the middle of a dissertation of Ike Carton as a classically doomed epic hero, much of the humour in The Sugar Frosted Nutsack comes from the juxtaposition of highfalutin’ academic language with absurd content which is often riddled with swears and juvenile jokes. In this, TSFN resembles the work of Monty Python, who often used vulgar language in the middle of something seemingly very proper and important, or Kurt Vonnegut’s Breakfast of Champions, which I think is this book’s closest ancestor. Leyner is incredibly skilled at miming things like academic gobbledygook, a TV Guide entry, or even rap lyrics. His call-and-response songs about big-dicked, blind, drug-addled bards from Jersey City are definitely less embarrassing than say, Don DeLillo’s similar “songs” in Cosmopolis. At least when Leyner name drops MF Doom or various dubstep artists, you get the sense that he knows what he’s talking about on that front at least as much as he does similar references to classic sculpture and the great works of the 19th Century. Not so DeLillo, in my opinion. Leyner shares with Thomas Pynchon a love of trashy, to-the-minute pop culture references: Pynchon’s tossed-off allusions to Pokémon and Nelly’s “Ride Wit Me” in Bleeding Edge would not feel out of place in TSFN in the slightest.

The narrative is also under attack throughout by one of the gods, XOXO. XOXO is the god of fucking around with people, and throughout the story it is implied that he is attacking the book itself by inserting “military-grade ass-cheese”, or useless digressions. To me, this recalled Nabokov’s Pale Fire, where the crazed fanboy Kinbote inserts his own recollections and arguments into a poem that literally has nothing to do with him at all. Great stuff, and by the end I kind of felt myself sympathizing with XOXO. The Sugar Frosted Nutsack feels fractal, like it could conceivably keep replicating itself and repeating itself forever, and if you think about it, the end of the book is the destruction of its world, isn’t it? This is the endgame that the Invisibles had in mind in Grant Morrison’s classic comic book series of the early Nineties, but here XOXO‘s attempts at derailing the narrative feel like a desperate attempt to stay alive.

As you might have surmised, The Sugar Frosted Nutsack is probably not for everyone. The ideal reader of the book would be someone who enjoys Nabokov, Pynchon, Vonnegut and DeLillo equally as much as say, Masters of the Universe, Tim and Eric Awesome Show, Great Job! or Gødland. Could this be you?