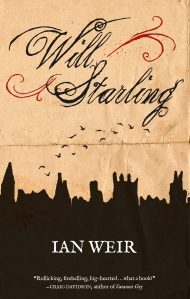 There’s something about the idea of surgery that captures our imaginations. The idea of a person who holds a literal knife’s edge between life and death for a helpless mortal, who’s either tied down or unconscious on a slab? Both of these scenarios hold their own horrors, making this the stuff of great drama. Far from the rich, professional class they embody today, the history of surgeons is until the 20th century pretty barbaric; practitioners were seen as little better than butchers for a long time, and the historic brutality of their profession can lend a nice frisson to horror and thriller narratives to this day. From Frankenstein through to Nip/Tuck and The Knick, the idea of a tortured soul holding the scalpel is still a very popular one in fiction, and with Will Starling author Ian Weir adds another great book to the list.

The eponymous Will Starling started life off as a foundling, a rejected child who grew up in an orphanage in England just before the Regency period began. As soon as he was able to, he ran headlong away from this miserable existence and joined the military. There, he hooked up with a Scottish surgeon named Comrie for five years tour of duty on the Continent as Wellington marched against Napoleon. At the war’s end, Comrie and Starling move to a rough part of London, real Sweeny Todd territory, setting up shop performing the same services for civilians, but a rising star in the medical world steals all of their thunder: Dionysus Atherton. Atherton is wealthy, fashionable and the talk of the town, but when a dinner party he attends goes horribly awry, Will starts to believe that there might be an horrific secret behind the dandyish visage.

The amount of research Weir must have done to fully populate his London astounded me. There’s a brief mention of some informative books he used at the back, but the overall effect is a world that is absolutely drenched in detail, almost as much as it is drenched in blood. The aforementioned horrors of surgery at this time are described in great detail, and by the end the reader has learned also about interesting period funereal practices, the Doomsday Men who steal fresh dead bodies for surgeons to practice on, and the Death House surgeon practice space, which features candles made of human fat. The interesting thing is that none of this is ever played for sheer sensation; there are frightening bits, gory bits and violent bits in this book, but Will Starling never feels like a wallow in depravity and horror.

I’m going to go right back on what I said up there by stating that while the book never feels sensationalistic in the sense that we understand it today, it does recall Victorian sensation novels in its atmosphere of growing dread. As Will begins to learn more and more about the man named Atherton, his suspicions begin to overtake him, and possibly even the reality of the book. It put me in mind of Jane Austen’s Northanger Abbey of all things, a sensation novel ancestor: a relatable hero who thinks they’re caught up in events far beyond their ken, and whose imagination blows things way out of proportion. The manner by which the story is being related to us, which I won’t reveal here, also puts the reader on edge, and makes us question the sanity of our narrator.

When I read Weir’s previous book Daniel O’Thunder a while back, I was especially drawn to the colourful language he brought to the story. I think in that book I must have learned fifty new words for punching someone, and in Will Starling I must have learned fifty more for dead bodies. One of Will’s most enjoyable tics as a narrator is that he’s a word fan himself, with an elevated vocabulary that is augmented by reading Samuel Johnson but also makes him look kind of foolish. When Will’s not talking, Weir also uses snippets of news stories, broadsheets, and other period literature to fill out the story, something he also did with Daniel O’Thunder. These breaks in the narration give Weir a chance to flex some other muscles voice-wise, and are a welcome addition to the text. Something else that Weir does in this book, that I don’t see in a lot of historical fiction, is the way he plays with names. Will refers to himself often as “Your Wery Umble Narrator” among other sobriquets, British soldiers are named “Tom Lobster” for their red jackets, this facility and play with words is actually very reminiscent of works dating from this period, but often sorely lacking in books that seek to replicate it.

With the one-two punch of Daniel O’Thunder and Will Starling, Ian Weir has become one of the Canadian authors whose next work I most anticipate. His evocation of the feeling of 19th century London is reminiscent of Tim Powers at his height, his attention to entertaining period detail recalls Pynchon’s Mason and Dixon and his facility with language makes every sentence worth savouring.

Full disclosure: I received a copy of the book in exchange for an honest review.